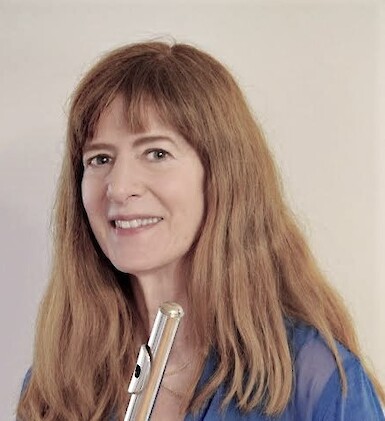 Praised as “...the listener is transformed into another time and place...hauntingly beautiful...full of colors...excellent...mastery." (the Flutist Quarterly) for her debut recording A Native American-Jazz Tribute/A Tune for America, and described as "Magical sound...expertly written, Sklar creates a fascinating exploration of Ancient Egypt using contemporary sound” (Fanfare Magazine) for her Silver Pharaoh/An Original Tribute to Ancient Egypt recording, Pamela is a published composer of chamber music who writes for unusual combinations of instruments.

A 2020 Arts Initiative Award winner from ArtsWestchester for her creative project Words Into Music, this original composition project first culminated in an informal virtual outdoor recording in September of 2020 and was performed live on November 20, 2021. Composed in 2020, Words into Music was inspired by her conversations with more than forty individuals from Mount Vernon, NY, who shared stories about family situations, community issues and personal struggles. Their shared soulful emotions gave Pam powerful material to create with musically. Performing on Native American flute, flute and bass flute, Pam was joined by oboe and English horn players, respectively, Jim Ferraiuolo and John Frisch, and clarinetist/bass clarinetist Enid Blount Press.

A recent winner of ArtsWestchester's 2022 Arts Alive Award for her new project Words into Music, Part 2, Pam will perfom new music with her two colleagues and also co-feature spoken educational & historical components. Date will be announced in mid- 2023, Words into Music, Part 2 will include interviews with Port Chester/Rye Brook and Rye Town community members. Pam's project is in collaboration with The Port Chester Historical Society.

Upcoming and recent events include collaborations as a composer and flutist with The Faucon. This co-features her 2Flutes ensemble (Falzon and Sklar) with mezzo soprano Anna Tonna, tenor Aram Tchobanian, and pianist Adam Kent, in October, 2022 at Lincoln Center's Bruno Walter Auditorium. Pam is a co-featured composer on the 2021 recording "...and Nothing Remains the Same", which includes her Two Journeys, written for and recorded by Eight Strings and a Whistle (Ravello Records).

In addition to Words into Music, the past several years have featured other exciting in-person premieres of Pam's original works including Mandolin on the Moon, a quartet for mandolin and (other) strings, written for members of the Metropolitan Opera Orchestra and presented in the New York area and at the Hudson River Museum Planetarium celebrating the 50th anniversary of the first manned lunar landing. In New York City, Pamela presented a performance-career workshop for The New York Flute Fair and conducted her flute choir composition Homecoming (commissioned by the Hoff-Barthelson Music School), in concerts for the local community. Other premieres included her quartet for flute and strings CARA, by the Cara Quartet in NYC and Connecticut. In November, 2019, her Two Journeys was performed in NYC recitals and for high school/university clinics in Havana, Cuba, by Eight Strings and a Whistle.

Other composition highlights include performances and a premiere of her woodwind quintet Green Awakening commissioned & premiered by the award-winning ensemble Englewinds. Pam's sonata for violin and piano, The Ocean We Want, was composed for an environmental sustainability theme and presented in Madrid, Spain. Other premieres/performances in Madrid and Manhattan include her quartet The Chains of Love inspired by Cervantes' poem, co-featuring mezzo soprano with flutes and piano, presented by Mujeres en Musica in 2017 & 2018.

Additional notable performances of Pam's music include works for mixed instruments presented at the National Flute Association Convention in Chicago, and other works written for double reeds presented by Threeds Oboe Trio at the International Double Reed Society Conference in New York City. Two of her compositions- Silver Pharaoh and The Sky, the Earth and the Afterworld can be heard on Threed's cd Palette.

A copy of her score of Spell 166 for five various flutes and organ is included in the Special Collection of the Lincoln Center Library for the Performing Arts; a featured slide show of Pam's inspired improvisation Heritage can be heard and viewed on Native Dream.

Pamela Sklar's composing career evolved naturally as an extension of her performing career. Many years of listening and playing professionally with outstanding artists and improvising co-created her original voice. Her first work Flutes From the Other Side was published in 2008. Pam remains equally passionate about playing, writing, hearing (and performing) her compositions. 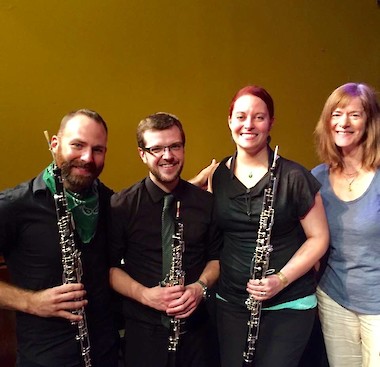 DOUBLE ENTENDRE with PS, post performance of The Sky, The Earth and the Afterworld. doubleentendre.org